Thank you again to every one of you who bought my book. Special thanks to those who review it. I plan to feature each on my blog: sofiakioroglou.wordpress.com.

Until then, here is a review, one among many, done on facebook by a wonderful person and reviewer, Susanna Schneider, whose help is greatly appreciated!
“Here is a book in English translated from Greek “In the Footsteps of Jesus” by Sophia Kioroglou. In this 180 page book, true miraculous happenings in the Holy Land are described in a narrative style with vivid imagery based on interviews conducted by the author.”

Due thanks also to Athina Kateri who took great pains to write a review on the book. This is immensely appreciated. Her review is as follows:

Dear beloved sister in Christ Sofia, I have just received and read your book!!!!This book is amazing!!!!I was so touched!!!!May you be under Jesus’ protection and Theotokos help!!!! This book opens your eyes!!!!And it is the perfect gift for everyone!!!!It is worths reading!!!Thanks AND wishing you the best Sofia in the footsteps of Jesus Christ, our Lord!!!!🙏🙏🙏🙏

Finally, due thanks to my friend Justin from the U.S who, despite the lockdown,was kind enough to wait for a whole two months to receive the book.

Also, thanks to all of you for your love and support.

Stay tuned as there will be more reviews trickling in.

May your heart abound the fullness of joy from heavens above!

Easter gives us the message that no matter how much  you try you can never put the truth in the grave. Happy Easter!

For those  wishing to come by a copy of the book, payment is made by paypal at : sophiek.74teacher@gmail.com

A single shaft of sunlight streams into the Church of the Holy Sepulchre, illuminating the spot where fire erupted from the Tomb of Christ during the ceremony of the Holy Fire on Saturday, the day before Orthodox Christian Easter. Fire comes from within the tomb but in 2012 I saw it before the entrance of the Venerable Patriarch Theofilos, in the form of a luminous globe weaving in and out of the crowd in divine effulgence, light the candles of a fellow pilgrim. This year, the Holy Fire was seen coming down like peals of thunder. Above the Holy Aedicule, we saw streaks of lightning turning dark into divine effulgence. Words fail me!!!Nun Sofia Tsatsarounou was outside. She could not enter the Church. Yet, her candles were lit of their own volition in the Holy Yard.  More than 10,000 Orthodox pilgrims filled the church this year. (Testimony of Sofia Kioroglou)

It was down to divine providence that we were rushed to an area I had never been. On the top balcony, the view was breathtaking, says Mrs Panagiota Aitaki. We had no idea of what would ensue. As I was standing, I saw the Greek Hagi- otafites parade around the tomb inside. A couple of minutes before the Patriarch entered the Ae- dicule, I saw three golden balls floating, open- ing and merging into an equilateral triangle. I screamed in amazement only to discover that I was in good company. Everyone beside me was awed and crying. 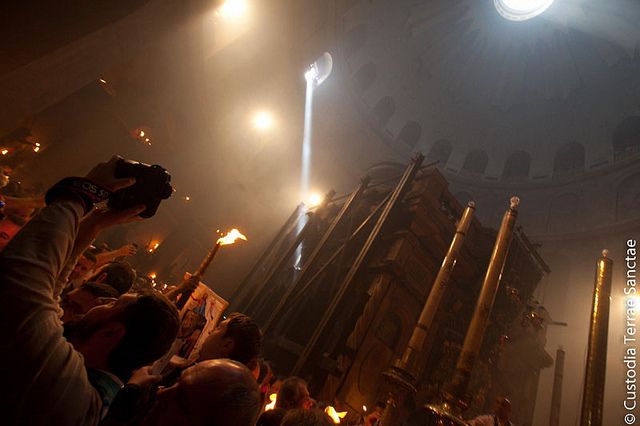 Due acknowledgements to a friend from New Carolina  Susanna Schneider

http://orthobeanies.simplesite.com/ for recommending the book!

Here is a book in English translated from Greek “In the Footsteps of Jesus” by Sophia Kioroglou. In this 160 page book, true miraculous happenings in the Holy Land are described in a narrative style with vivid imagery based on interviews conducted by the author. Cost is 10 euros which comes to about 12 dollars plus shipping paid through paypal.

To order the book send message to: sophiek.74teacher@gmail.com

Below is a miracle story from the book

Δείτε τη μετάφραση
TRUE MIRACULOUS HAPPENINGS IN THE HOLY LAND ARE DESCRIBED IN A NARRATIVE STYLE WITH VIVID IMAGERY BASED ON INTERVIEWS CONDUCTED BY THE AUTHOR. To come by a copy of the book, you can shoot me an email

For those in Greece who want to come by a copy of a book, they can always visit Mrs. Psaroudaki’s bookstore at 14, Vasilissis Str in Maroussi. Tel. no:6977848891

Thanks to all those who have supported me both tangibly and intangibly to bring this gem of a book out!Thank you so much all. A special thank you to Vasiliki Rozi for everything she has done. Without her, this book would not have been published. Due acknowledgments should go to my spiritual father, my husband, Sophia Kouna, Sofia Gerali, Vasiliki Vlachopoulou, Father Anastasios, Father Georgios from Corfu, Father Georgios from Maroussi, Nun Sofia, Athina Kateri, Matina Mantzourani, Derrick Knight from WP, Vincent from New Jersey (a very special man I met on WP) and so many others.

The book is available at Mrs Psaroudaki’s bookshop in Maroussi, 14 Vasilissis Sofias STR, opposite the Town Hall.

After the publication of Mystical Experiences in the Holy Land comes the new English Edition of In the Footsteps of Jesus by Sofia Kioroglou. A special thanks to all those who have supported me and especially to Mrs Sofia Kouna, Vasiliki Rozi, Athina Kateri, Vasiliki Vlachopoulou among others. The book is coming up next week.

Fr Ignatius gave us his blessing to continue
First of all, due acknowledgements should go
to a special lady who requested that I write a few

words about the great Hegoumen of Tears, Fa-
ther Ignaty. A figure totally unknown to the West

as well as to his homeland. However, his seal of

approval on this undertaking was given in a rath-
er unexpected way. Having written my first book

in Greek where the life and miracles of Fr Ignaty

first saw the light of day, I did not know wheth-
er I had been heading in the right direction. Of

course, I had always felt his presence during my
project but the clincher was an event that totally
bowled over Mrs Sofia Kouna from Athens who

happened to know him personally and had wit-
nessed many of his miracles while alive. When

she bought my first book entitled “ MYSTICAL
EXPERIENCES IN THE HOLY LAND”, she
headed home to curl up on her sofa and read
it. When she unlocked and opened the door of
her house, she felt a light breeze caressing her

cheeks and heard something plop in the kitch-
en. She rushed to see what it was that had fallen

and, guess what? Of all things, it was an icon face
down. The icon of Father Ignaty she had framed
to remember him. She immmediately picked up

the phone and called me to tell me the news.
That was the green light to an investigation we
had launched to find out more about his parents
and life before serving in Israel. It is our fervent

wish that Father Ignaty, through his interces-
sions, because he was a saint and lived a right-
eous life, reveal himself to his compatriots. The

glorification of saints in the Orthodox Church is
a recognition that God’s holiness is manifested in
the Church through these grace-filled men and
women whose lives were pleasing to God.
Can the Church “make” a saint? The answer
is no. Only God can do that. We glorify those
whom God Himself has glorified, seeing in their
lives true love for God and their neighbors. The
Church merely recognizes that such a person has
cooperated with God’s grace to the extent that
his or her holiness is beyond doubt.

Are saints “elected” by special panels or by ma-
jority vote? Again, the answer is no. Long before

an official inquiry into a person’s life is made,
that person is venerated by the people where he
or she lived and died. His or her memory is kept
alive by the people who pray for his or her soul or
who ask him or her for intercession. Sometimes
people will visit his or her grave or have icons
painted through their love for the person. Then
a request is made, usually through the diocesan

bishop, for the Church to recognize that person
as a saint. A committee, such as the Orthodox
Church in America’s Canonization Commission,
is formed to research the life of the person who is
being considered for glorification and to submit a
report to the Holy Synod stating its reasons why
the person should or should not be recognized

as a saint. Then the Holy Synod decides to num-
ber that person among the saints and have icons

He was a saint!